It is being while i wrote anything, i has been busy with my new job that involve doing some interesting work in performance tuning. One of the challenge is to reduce object creation during critical part of application.

Garbage Collection hiccups has been main pain point in java for some time, although java has improved over time with GC algorithmic. Azul is market leader developing pause less GC but Azul JVM are not free as speech!

Creating too many temporary/garbage object does't work too well because it create work for GC and it is going to have effect on latency, too much garbage also does't work well with multi core system because it causes cache pollution.

So how should we fix this ?

Garbage less coding
This is only possible if you know how many object you need upfront and pre-allocate them, but in reality that is very difficult to find that , but in-case if you still managed to do that then you have to worry about another issue


So what is the solution for above problem
There is Object Pool design pattern that can address both of the above issue,it lets you to specify num of object that you need in pool and handles concurrent request to serve object request.

Object Pool has been base of many application that has low latency requirement, flavor of object pool is Flyweight design pattern.

Synchronized - This was the only way to handle concurrency before JDK 1.5, apache has written wonder full object pool API based on synchronized

Locks   - Java added excellent support for concurrent programming since JDK 1.5, there has been some work to use Locks to develop Object Pool for eg furious-objectpool

Lock Free - I could not find any implementation that is built using fully lock free technique, but furious-objectpool use mix of ArrayBlocking queue & ConcurrentLinked queue

Lets measure performance
In this test i have created pool of 1 Million object and those object are accessed by different pool implementation, objects are taken from pool and return back to pool. 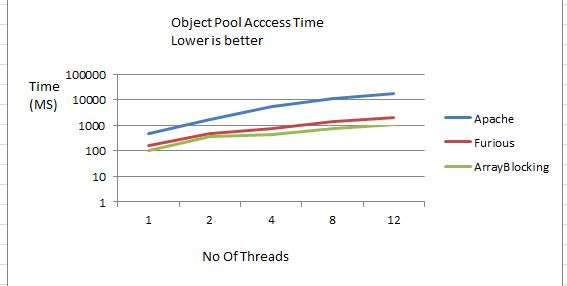 This test include pool from Apache, Furious Pool & ArrayBlocking based Pool

Other two Furious & ArrayBlocking based pool performs better but both of them also slows down as contention increase.

I have to do some more detail investigation to find out why Furious is taking double time because it is also based on ArrayBlocking queue.

Performance of arrayblocking queue is decent but it is lock based approach, what type of performance we can get if we can implement lock free pool.

Lock free pool.
Implementing lock free pool is not impossible but bit difficult because you have to handle multiple producer & consumer.

I will implement hybrid pool which will use lock on the producer side & non blocking technique on the consumer side.

Lets have look some numbers 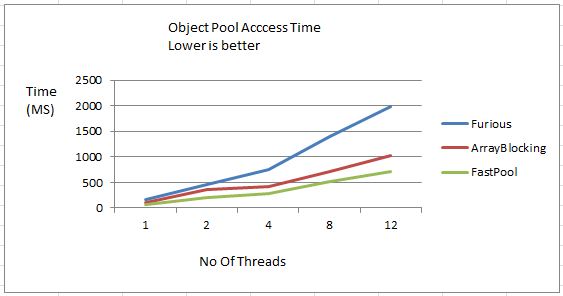 I performed same test with new implementation (FastPool) and it is almost 30% faster than ArayBlocking queue.

30% improvement is not bad, it can definitely help is meeting latency goal.

What makes Fast Pool fast!
I used couple of technique to make it fast


If you are interested in having look at code then it is available @ FastObjectPool.java

Have you ever faced issue when you trusted system, team or product and that resulted in failure of feature or system? In fast changing...