As name suggest it is used for doing atomic increment/decremented, so you don't have to use locks, it will use processor level instruction to do so.
It is based on Compare-and-swap instruction.

Issue with CAS
CAS works on optimistic approach, it expects some failure, so it will retry operation, so in theory if there is no contention then it should work pretty fast.

There is another alternate way of doing same thing using Fetch-and-add.
Fetch-and-add is very different from CAS, it is not based on re-try loops.

Dave Dice compares CAS vs Fetch-and-add in atomic_fetch_and_add_vs blog, i can't explain better than this, so i will copy content from his blog

Since fetch-and-add has predictable progress properties, so it is used for developing waiting free algorithms.
Unfortunately JDK 7 does not have support for fetch-and-add, one more reason why C++ people will be happy that C++ is great!


As we all know things do change & java community decided to added support for fetch-and-add in JDK8, one more good reason to migrate to JDK8.

In this test i increment counter 10 Million times with different number of threads. Thread numbers are increased to see how counter performs under contention. 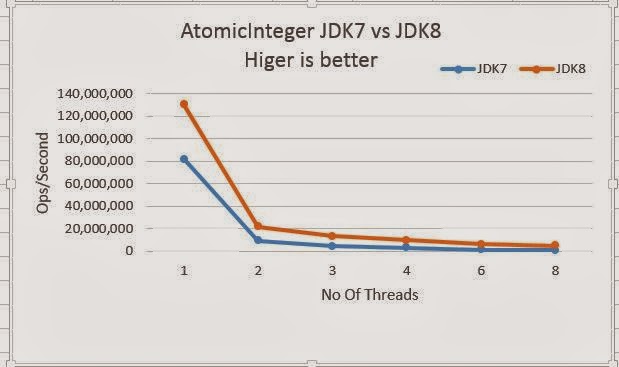 JDK8 counter is winner in this case, best performance is when there is no contention , for JDK7 it is 80 MOPS but for JDK8 it close to 130 MOPS.
For single thread difference is not much , JDK8 is around 0.5 times faster but as contention increases performance JDK7 counter starts falling.

I will put another graph by removing 1 thread number, so that we can clearly see how these counter performs. 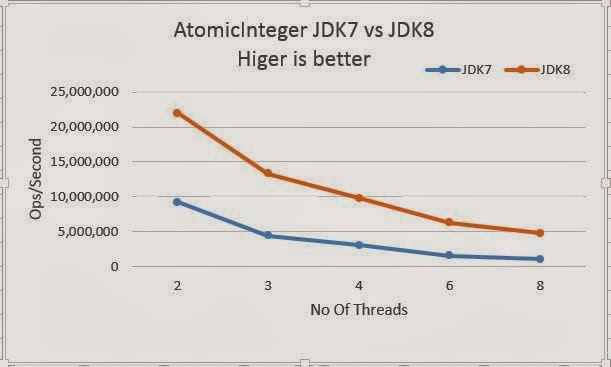 This gives better idea of how slow JDK7 atomic integer is, for 8 threads JDK8 counter is around 3.5X times faster.

JDK8 is using new function(getAndAddInt) from unsafe to do the magic. Unsafe has become more useful!

Dive in Assembly
To just confirm that all performance again is coming from fetch-and-add i had look at assembly generated.


Conclusion
Introduction of fetch-and-add type of feature in java will make it more suitable for high performance computing, we will see more wait free algorithm in java

Code used for testing is available @ AtomicCounterTest
Just compile for jdk7/8 and execute it.
at February 17, 2014 297 comments:

Have you ever faced issue when you trusted system, team or product and that resulted in failure of feature or system? In fast changing...